Today, my brother and I ran into Ricky Bell at the Home Depot on Victory Drive – we met him on the MEDIA TRIP to Bosnia in 2001. Ricky was part of the 165th Georgia Air Guard (National Guard) 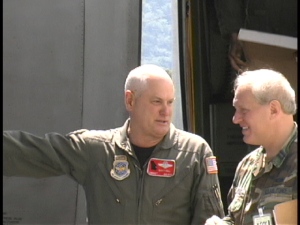 This is a picture of Ricky Bell and Dave Simons, taken in June, 2001 while we were in the Azores. We left Savannah, flew to Atlanta, then the Azores, then Germany, then Bosnia. It took 20 hours in a C130.

This was our wonderful plane – at our stop in Germany. 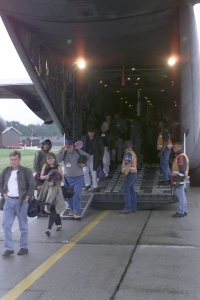 When we finally arrived in Bosnia, we exited from the back of the plane. That plane was so big, that it could fit tanks in it. John Carrington, a photographer for the Savannah Morning News, was in front of me.

Here is a group shot of everybody that was on the 10 day trip to Bosnia. It was made up of media from Georgia. 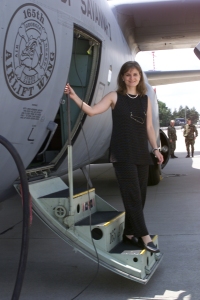 A photo of me in the Azores.

We interviewed a number of small businesses that survived the war. Our TV show, OPEN FOR BUSINESS (R) ran Oct 2001 – right after 9/11. This couple was a rug dealer in an outdoor market. I think it was 107 degrees that day.

Photo of Sam, preparing us to land.

I was video taping the inside of the C130, my brother Dave was behind me.

He was my “official” videographer on the media trip. We produced a thirty minute documentary about being in the national guard. I also kept a diary about the trip. Connect Savannah ran the entire diary in their publication.