(ATLANTA, GA) A resolution passed by the Georgia State Senate has recognized Savannah attorney Charles “Bo” Bowen for his services to both the state’s entertainment industry and to its legal profession.

The Senate resolution was sponsored by State Sens. Lester Jackson (D-Savannah) and Ben Watson (R-Savannah) and praises Bowen’s role in promoting Savannah’s growing movie and television industry. The resolution cites, in part, the reasons for the recognition: “Bo founded the Savannah Film Alliancein 2015 to foster cooperation and collaboration within the local entertainment industry; he is also the founder and president of Southern Gateway Production Services, which provides support to all out-of-town productions coming to the region; and he is the co-founder of Aeroscope Studios, the author of three eBooks on business and entertainment law, and currently serves on numerous corporate boards and councils.”

The resolution also recaps business honors Bowen has received. They include being named “Business Advocate of the Year” by the Savannah Morning News, winning the “Helen V. Head Business Leader of the Year Award” from the Savannah Area Chamber of Commerceand receiving additional accolades from the legal profession.

Bowenfirst met with Governor Brian Kemp before heading to the Senate floor. Sen. Jackson then read the resolution aloud and invited Bowento address the Senate. He was then named an Outstanding Georgia Citizen by the Georgia Secretary of State.

The recognition from the Secretary of Statereads: “May this Outstanding Citizen be afforded every courtesy as a Goodwill Ambassador from Georgia in his travels to other states, to nations beyond the borders of the United States of America, or wherever he may hereafter travel or reside. Thank you for your service to our State.” 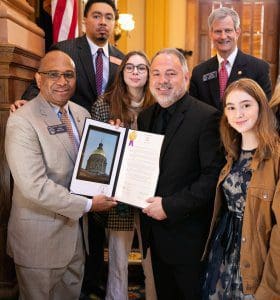 Bowen’s two daughters accompanied him to the Georgia State Capitol. In his remarks before the Senate, Bowenstated: “I am deeply honored, and I am very grateful that my two teenage daughters could be here today to see firsthand that working hard in your profession and trying to help others succeed does not go unnoticed. I know that is a lesson they will carry with them into adulthood. I also want to thank all of you, the leaders of the State of Georgia, for the tremendous work you have done in promoting the entertainment industry and helping ensure every year that Georgia remains the greatest place in the world to conduct business.”

MORE INFORMATION ABOUT THE BOWEN LAW GROUP
Based out of Savannah, Charles Bowenis a business attorney who focuses on commercial and entertainment law. Bowen attended Mercer Universityin Macon, Ga., where he graduated summa cum laude with honors in both psychology and political science. Upon graduating from Georgetown UniversityLaw Center in 1995, he moved to Savannah and established a corporate law practice. Bowenhas received the Martindale-Hubbell® AV® Preeminent™ rating, the highest rating based upon confidential surveys sent to other attorneys. He also has been selected by the members of the State Bar of Georgia as one of Georgia Trend’s Legal Elite in two categories: Business Law and Corporate Law. With panoramic views of the city and the Savannah River, The Bowen Law Groupis located on the top floor of the Manger Building at 7 East Congress Street. For more information, call 912.544.2050 or visit thebowenlawgroup.com. Follow The Bowen Law Groupon Twitter at @bowenlawgroup.