(POOLER, GA) Enmarket, a Savannah-based chain of convenience stores, built a new 6,366-square-foot store on Pooler Parkway across the street from the soon-to-open St. Joseph’s/CandlerPooler Campus.

The store, which offers 20 fueling stations and an electronic vehicle charging station, is Enmarket’s third in Pooler but its first on Pooler Parkway. The two others are on Highway 80. 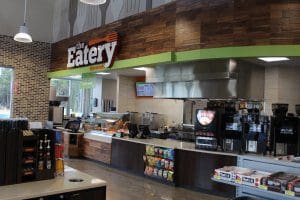 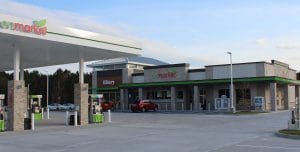 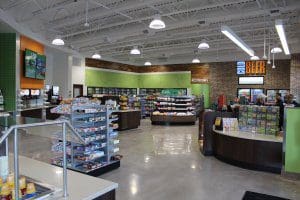 Some features are invisible to customers but will contribute to better service, such things as a redesigned and more efficient kitchen and an improved vendor receiving area. Progressive Builderswas the general contractor for the project.

“This is the largest Enmarketwe’ve built from the ground up,” said Brett Giesick, president of Enmarket. “We’re excited to announce this new location, and believe it serves as a fine example of our dedication to providing customers with quality service and food.”

The new store is part of an Enmarketexpansion plan that includes the rebuild of the existing store on Martin Luther King Jr. Boulevard in downtown Savannah, a new headquarters complex that will include the rebuild of the Enmarketon U.S. 17 at Chatham Parkway and a future store in Port Wentworth.

Enmarketcurrently operates 124 convenience stores and 14 quick-serve restaurants with more than 1,200 employees in Georgia and North and South Carolina.

ABOUT ENMARKET
Enmarket, founded as Interstate Stations by Robert Demere in 1963, is part of Savannah-based Colonial Group, Inc. The retailer operates convenience stores in Georgia, South Carolina and North Carolina and was noted as the industry’s “Biggest Mover” in store count ranking by Convenience Store Newsin 2018. The company is committed to giving back to the community through many charitable contributions and volunteer efforts, offering fresh food, healthy snacks, and competitively priced quality fuel as part of its mission to enrich life. Enmarketcurrently employs more than 1,200 people and operates 124 convenience stores and 14 quick-serve restaurants as the 54th largest convenience store operator in the country. www.enmarket.com