A Tale of Two Houses on Tybee Island

Felder & Associates, a Savannah architecture firm, was recently asked to work on a project that would encompass renovating an historic Tybee raised cottage that had sheltered four generations of one family. They were also commissioned to build a companion structure on the adjacent lots.

The historic Tybee Island property included a Tybee cottage built in 1935 on two beachfront lots and two empty adjacent lots. The two grandchildren of the original owners divided the property, the granddaughter receiving the historic house, and the grandson the two empty lots. 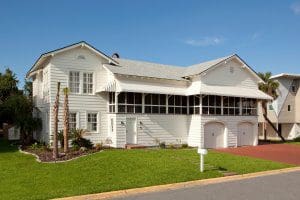 The new owners selected Felder & Associatesto renovate the cottage and build a new house on the two remaining lots. Felder & Associatescreated a unique design that included incorporating green passive elements to catch breezes and shield direct sunlight. They also added solar panels to the roofs to capitalize on Tybee’s Solarize program, which offered a 30 percent federal tax credit through 2016.

“We performed sun-angle studies for every season and then made slight adjustments on porches and overhangs to make sure the sun would not shine directly into the house,” said Brian Felder, the firm’s principal. “We were also careful to place the new house so it would be in balance with the old house and the environment.” Felder & Associatesaimed to have the smallest footprint possible. Felder said, “While we were allowed to have a 50 percent impact on the dune protection zone, the new house has only a 10 to 15 percent impact.”

Felder respected the integrity of the original cottage to celebrate the traditional Tybee architecture. With one minor addition, the cottage retained its wrap-around porch, servant quarters and wood paneling. Felder even removed more recent vinyl siding to expose the original mitered cypress siding.

“The house needed to look the way it always did,” Felder said. “The flow of public space remains what it always was. The only change we made was to swap the kitchen and bedroom and then add a master suite tucked away on the land side.” The original floors and on-site built doors and windows remain along with the original board-and-batten interior walls.

Felder considered family input and a great deal of research on the cottage’s history before updating the traditional structure. To renovate it without having to bring it up to FEMA guidelines, Felder had the home designated as an historic structure.

“Tybee cottages were built with materials that are superior to what we have today,” he said. “They have amazing structural members made of cedar or cypress that have lasted 80 to 90 years. The house sits on reinforced concrete piers. Every surface in the house is wood. There are no issues with mold and mildew that come with drywall. It performs well in open air. And while it sits low to the ground and could be prone to the occasional tropical storm surge, it is not as vulnerable as the newer homes that code requires to be built up on stilts. Some of them are like sails in the wind.”

The new home was built before the original cottage renovations were underway. Constructed of concrete and steel with wood framing, it has an exterior of Hardi Plank siding painted Cape Cod gray and accented with a sandy-tan trim. The inspiration for this choice came from an architectural model of a building the owners had seen in a museum. They asked Felder to bring its nautical motion and movement into the façade of their new home. 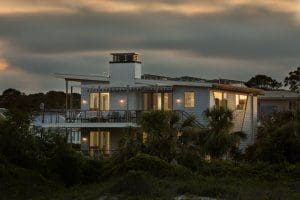 Felder incorporated the floor plan of the traditional cottage into the new home, flipping it upside-down in the three-story structure. In accordance with code, a garage and elevator entrance is on the street level. Above that are the bedrooms, and the main living area is situated on the top floor, with breathtaking panoramic views of the Atlantic Ocean.